“Magic sand” might help us understand the physics of granular matter 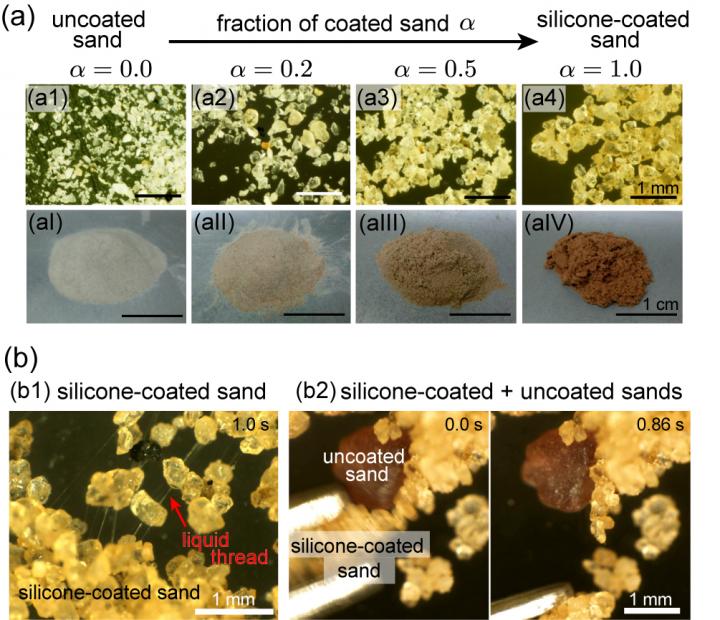 Tokyo, Japan – Researchers from Tokyo Metropolitan University have studied the properties of mixtures of silicone-coated “magic sand”, a popular kid’s toy, and normal sand. Silicone-coated sand particles were found to interact with each other only, and not with other sand particles. The team discovered that adding silicone-coated sand beyond a certain threshold leads to an abrupt change in clustering and rigidity, a simple, useful way to potentially tune the flow of granular materials for industry.

Sand is a fascinating material. It can flow and be poured like a liquid, but retains many of the properties of solids, clogging pipes or forming sand dunes. The behavior of collections of small particles like sand is known as granular physics, and is an immensely important field for the handling and transport of the wide range of granular materials out there like grains, rice, powders, and the vast amounts of sand used in the construction industry.

A key conundrum of this branch of physics is the sheer numbers involved. Grains interact via simple, Newtonian mechanics, but because so many particles are interacting at once, there is an emergent complexity of flow behavior that cannot yet be explained by simple equations. Scientists are thus not only looking for better theoretical models to explain granular behavior, but convenient “model systems” that can be handled and tuned in the lab to give insights into how the microscopic structure of granular materials gives rise to their macroscopic properties.

A team led by Assistant Professor Marie Tani and Professor Rei Kurita of Tokyo Metropolitan University have been studying what happens to sand when sand gets wet. It is well known that beach sand, for example, behaves completely differently; sand castles would be tricky to build when dry! This behavior is largely due to the formation of “bridges” of liquid between particles, known as capillary bridges, strongly tying grains together to form load-bearing structures. However, homogeneous wet sand is notoriously hard to prepare in the lab; it’s hard to mix evenly, and dries very quickly. To overcome this issue, they instead used “magic sand,” hydrophobic sand particles coated in silicone oil, commonly available as a kid’s toy. The team found that not only does “magic sand” strongly attract each other via thin strands of oil, but it completely ignores normal sand, simply bumping into it like dry grains. By mixing “magic sand” and normal sand in different ratios, the team could freely study how wet sand behaves down to even the smallest liquid fractions, where only some grains are connected via capillary bridges.

Using three independent methods involving sieving, measuring density and forming stable mounds of sand, they found that the mechanical properties of the mixture changes drastically when the fraction of magic sand to normal sand exceeds 20%. This agreed with findings from percolation theory, which studies how connections between particles span space without any breakages, letting the sand mixture behave significantly more solid-like and bear its own weight. This behavior is known for polymer gels, and helps unify theoretical approaches applied to completely different materials.

The team’s mixtures also provide a convenient material for industry with mechanical properties that can be easily modified. Importantly, the method provides a new, convenient, accurate and informative way to explore granular physics, and may become the new default for scientists in future investigations.

Disclaimer: AAAS and EurekAlert! are not responsible for the accuracy of news releases posted to EurekAlert! by contributing institutions or for the use of any information through the EurekAlert system.

Spanking may affect the brain development of a child

Bottom-up is the way forward for nitrogen reduction at institutions